In 1984, Healthy Charlotte Alliance established the James Gray Cannon Award. We present this award to an individual who has demonstrated exceptional volunteer leadership toward the advancement of medical care and good health in the Charlotte-Mecklenburg community.

Past recipients include hospital volunteers, organization founders and board members – people who, through their unselfish dedication to an organization or cause, have made a difference in our community.

The 2020 Cannon Award recipient will be honored at our Annual Meeting (May 20, 2020) and the nonprofit of his/her choosing will receive a $1,000 donation from Healthy Charlotte Alliance.

The nomination window is now open for the 2020 Cannon Award and we will accept nominations through February 15, 2020.  We invite you to nominate an exceptional volunteer by submitting a brief online nomination form.

Nominees will remain on active file for consideration for three years.

Volunteers, as well as healthcare professionals volunteering outside their paid positions, are eligible. Members of Healthy Charlotte Alliance are not eligible.

We look forward to receiving your nomination for this award. Please feel free to contact Cannon Award Chairperson, Mimi Compton at kwcompt@aol.com, with any questions.

NOMINATE SOMEONE FOR THE JAMES GRAY CANNON AWARD

2019 Dr. John Klimas has been the visionary behind Physicians Reach Out, an initiative of Care Ring. In the early 2000s, Dr. Klimas led the Mecklenburg County Medical Society Board of Directors to build a local network of physicians, volunteering to care for patients who were low-income, uninsured or otherwise excluded. Over the past 15 years, what began as a small but mighty physician recruitment team, has grown into a thriving, comprehensive network of 1,600 primary and specialty care providers who treat more than 4,000 patients each year. In May 2018, the amount of donated care since Physicians Reach Out began in 2004, exceeded $150 million! Even general surgery and oncology care are now provided to qualified patients. Thousands of people have received vital care since the inception of PRO and this incredible initiative would not exist today if not for the passion and leadership of Dr. Kilmas.

2018 Suzy Garvey has served multiple terms on the board of Hospitality House of Charlotte for the past 21 years.  She has chaired and still serves on the Advisory Committee, Strategic Planning and Development Committee.  Thank you Suzy for your service to the community.

2017 Meghan Hampton founder of “In the NIC of Time” which supports the Neonatal Intensive Care Nursery at Levine.  Meghan is a fierce advocate for the smallest fighters in our community.

2016 Laura Funderburg for her work with Arts for Life, both in helping to launch the program at Levine Children’s Cancer Center and for her dedication, compassion and dependability as a volunteer.

2010 Mr. Howard C. “Smoky” Bissell for his leadership in the $85 million capital campaign for the Levine Children’s Hospital

2006 Elizabeth “Lib” Harkey for her work with Florence Crittenton Services

2005 Edward T. Hinson for his work with Bioethics Resource Group

2004 Dr. Bill Cody- quietly worked to insure healthcare for the underserved, including homeless women and children and people living with HIV/AIDS

2002 Quay Youngblood-Volunteer at Presbyterian Hospital for over 24 years.

2001 Barbara Hautau-Afflicted with MS since the late 70’s, formed a Christian based MS support group in 1993 and, with her husband, organized an annual banquet at Calvary Church for people with disabilities.

1999 Bruce Parker-Community philanthropist with a long-standing interest in hunger relief as well as support for housing and other health-related activities.

1991 Jan and Darrell Hargett-Founders and Presidents, “Wish I Could” (an organization for granting wishes of chronically and terminally ill children)

1988 Donald Simpson-Founder and President, Mission Air Industries, Inc. (an organization to provide air ambulance service for the sick and insured that would not be available financially or “in time”)

Healthy Charlotte Alliance has been awarded the BBB Accredited Charity Seal for Recognition as a credible, trustworthy charity. 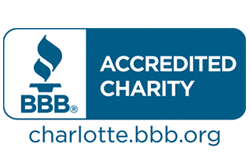 Healthy Charlotte Alliance has been awarded the Silver Seal for transparency as a trustworthy, non-profit charity.

Get Current News and Updates…